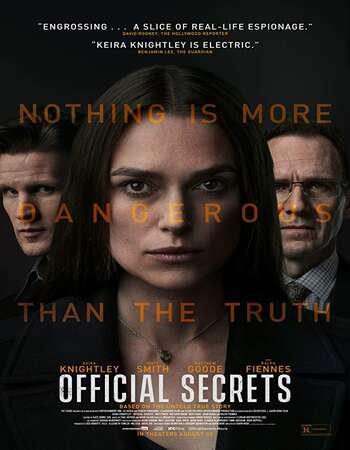 Story line: A morality tale for the 21st century, Official Secrets tells the true story of British Intelligence whistle-blower Katharine Gun who, during the immediate run-up to the 2003 Iraq invasion, leaked a top secret NSA memo exposing a joint US-UK illegal spying operation against members of the UN Security Council. The memo proposed blackmailing smaller, undecided member states into voting for war. At great personal and professional risk, journalist Martin Bright published the leaked document in The Observer newspaper in London, and the story made headlines around the world. Members of the Security Council were outraged and any chance of a UN resolution in favour of war collapsed. But within days, Bush declared he no longer needed UN backing and invaded anyway. As Iraq descended into chaos, Katharine was arrested and charged with breaching the Official Secrets Act. Martin faced potential charges too. Their legal battles exposed the highest levels of government in both London and Washington