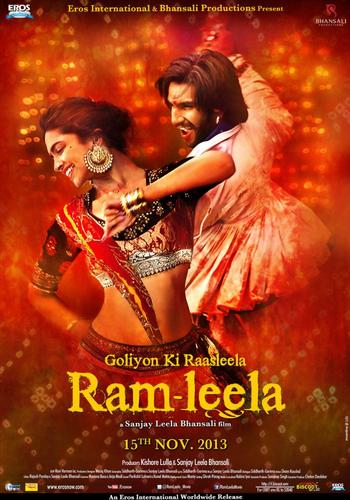 One fateful day Ram sees, and instantly falls in love with, his female counterpart in the rival clan, Leela (Deepika Padukone). The feeling is very much mutual, and, per “Romeo and Juliet,” the lovers have to deal with the conflict between their respective families, and the repercussions of skirmishes between them.

There are a couple of script and pacing hiccups in “Ram-Leela,” most notably a regretful backsliding into regressive, lazy use of threatened rape as a means of heightening dramatic stakes. This is all the more unfortunate because Leela’s family, run by her terrifying mother (an extraordinary Supriya Pathak), is a matriarchal criminal empire where the men, however much they may preen, absolutely defer.

The pacing also dips rather badly in the middle and whenever Ram and Leela are separated, since from a dramatic standpoint their tandem star power is the engine that makes the whole thing run.

During Dusshera, as the Ramlila parade is ending, many Rajadis are killed and the village is on the brink of war, which Ram senses. Ram and Leela believe they are the sole owners of each other’s lives, and hence they decide to kill each other instead of dying fighting.

Leela agrees and both commit suicide, not knowing that Dhankor Baa has undergone a change of heart and has killed Bhavani, ordering peace be meted out to the other clan. The two clans finally unite to cremate the bodies of Ram and Leela together respectfully.